Chris Taylor, President and CEO of Great Bear said, “Our strong results drove us to fast track our exploration process with aggressive new step-down drilling. We have now hit more high-grade gold mineralization 440 metres down-plunge from surface and 150 metres down-plunge from the nearest previously reported high-grade intercept.  Results suggest the Hinge Zone projects from near-surface with significant depth potential, and contains a high degree of continuity of gold mineralization within its extensive vein network.  During 2019, we plan to test its continuity down to increasing depths, and will also drill deeper and along strike into what we interpret as at least 6 additional gold zones with similar plunges along the 500 metre strike length of the Hinge Zone vein swarm we have drilled so far.”

New 3D sections of the Hinge Zone and Dixie Limb, showing multiple steeply-plunging gold zones, are provided in Figure 1, Figure 2 and Figure 3.  The most recent assay results are provided in Table 1.

Highlights of the most recent Hinge Zone drill results include:

July 2019 marks the one year anniversary of Great Bear’s Hinge Zone drill program.  A summary of some key points of the Hinge Zone discovery as drilled to-date include: 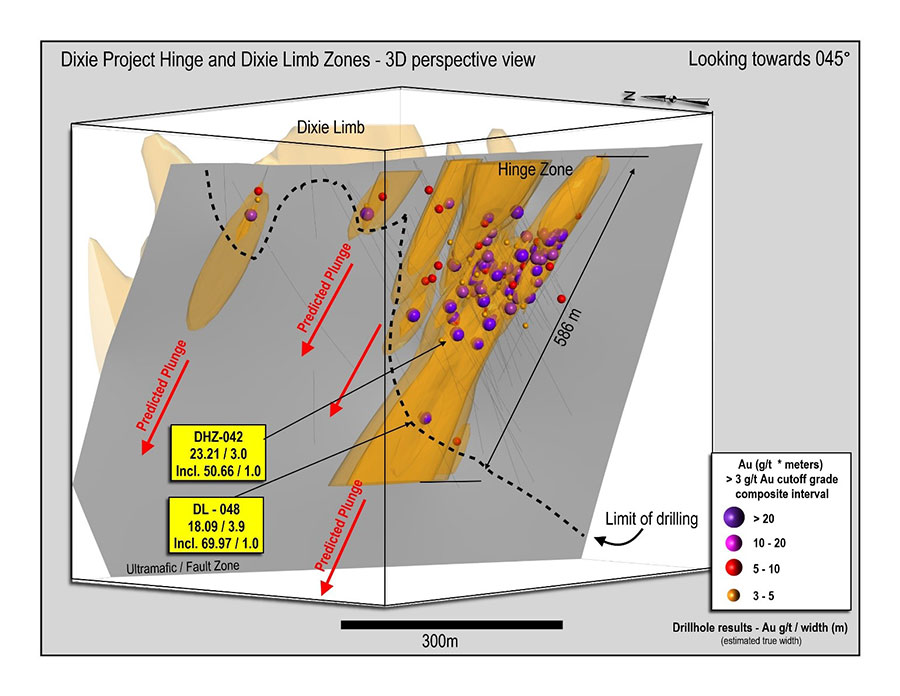 With its recently-completed financing, Great Bear currently has approximately $20,000,000 in cash and low operating all-in drill costs of approximately $175/metre.  The Company continues to undertake a fully funded, 90,000 metre drill program that is expected to continue through 2019 and 2020.  Targets tested will include the Hinge Zone, Dixie Limb Zone, Bear-Rimini Zone, LP Fault, North Fault, and other targets across the property.  In order to accelerate the program, a second drill rig was added in February, and a third drill rig arrived in June 2019.  Approximately 60,000 metres of drilling remain in the current program.

* reported width is determined to be 90-95% of true width based on intersection points of the drill hole intercept with the geological model and oriented drill core data.

Figure 2: Rotated view looking to the southeast of the Hinge and Dixie Limb Zones showing multiple steeply-plunging gold mineralized zones that have been intersected to-date, flanking a central ultramafic-intruded fault.  Drill hole DL-048 collared in the Dixie Limb Zone and continued across the Hinge Zone at depth.  It is Great Bear’s deepest drill hole into the Hinge Zone mineralization to-date. 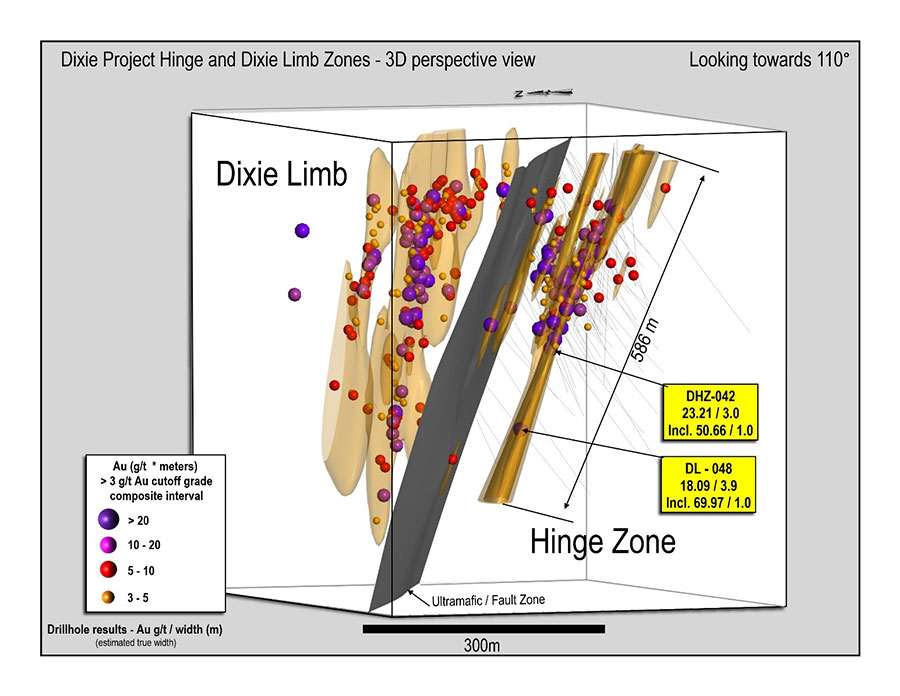 Chris Taylor continued, “The nearly universal pattern within gold deposits in the Red Lake district is of multiple steeply-plunging “ore shoots” developed along lithological and structural controls at variable depths, and our results at Dixie to-date suggest the same type of pattern may be present within the Hinge Zone vein swarm.  We don’t yet know how many steeply-plunging sub-zones of gold mineralization are present, however we have already intersected 6 to 8 of them along 500 metres of strike length.  We continue to drill aggressively on the known sub-zones and will continue to step out along strike and at depth in an attempt to discover how many there are, and to characterize their size, grade and continuity of gold endowment.”

Figure 3: View downwards towards the north of the same interpreted drill results data shown in Figure 1 and Figure 2. 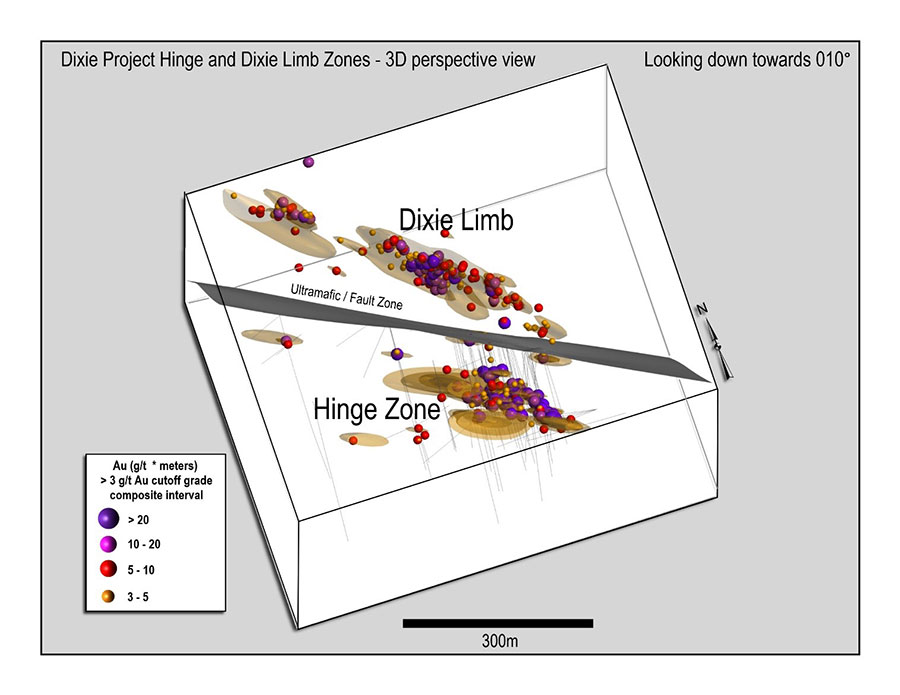 Great Bear Resources Ltd. (TSX-V: GBR) is a well-financed company based in Vancouver, Canada, managed by a team with a track record of success in the mineral exploration sector. Great Bear holds a 100% interest, royalty free, in its flagship Dixie property, which is road accessible year-round via Highway 105, a 15 minute drive from downtown Red Lake, Ontario.  The Red Lake mining district is one of the premier mining districts in Canada, benefitting from major active mining operations including the Red Lake Gold Mine of Newmont Goldcorp Corp., plus modern infrastructure and a skilled workforce.  Production from the Red Lake district does not necessarily reflect the mineralization that may, or may not be hosted on the Company’s Dixie property.  The Dixie property covers a drill and geophysically defined multi kilometre gold mineralized system similar to that associated with other producing gold mines in the district.  In addition, Great Bear is also earning a 100% royalty-free interest in the Pakwash, Dedee and Sobel properties, which cover regionally significant gold-controlling structures and prospective geology.  All of Great Bear’s Red Lake projects are accessible year-round through existing roads.

Drill core is logged and sampled in a secure core storage facility located in Red Lake Ontario.  Core samples from the program are cut in half, using a diamond cutting saw, and are sent to SGS Canada Inc. in Red Lake, Ontario, and Activation Laboratories in Burnaby, British Columbia, both of which are accredited mineral analysis laboratories, for analysis. All samples are analysed for gold using standard Fire Assay-AA techniques. Samples returning over 10.0 g/t gold are analysed utilizing standard Fire Assay-Gravimetric methods. Selected samples with visible gold are also analyzed with a standard 1 kg metallic screen fire assay.  Certified gold reference standards, blanks and field duplicates are routinely inserted into the sample stream, as part of Great Bear’s quality control/quality assurance program (QAQC).  No QAQC issues were noted with the results reported herein.