Vancouver, BC – May 17, 2019, Ethos Gold Corp. (“Ethos” or the “Company”) (TSXV:ECC) (OTCQB: ETHOF) is pleased to announce that it has executed an earn-in agreement with Victory Metals Ltd. (“Victory”) (TSXV:VMX) under which Ethos will drill a Carlin style gold target at Victory’s Iron Point vanadium project, located 22 miles east of Winnemucca, Nevada.  Ethos is further pleased to announce that Dr. Quinton Hennigh will be joining Ethos as a technical consultant and will oversee this drill campaign.

Figure 1: Iron Point is located at the intersection of the Cortez/Battle Mountain Trend and the Getchell Trend, which have combined historic production of 200 million oz of gold.

Stated Dr. Quinton Hennigh, “I think Iron Point is one of the most prospective locations for undiscovered Carlin style gold mineralization left in Nevada. I explored the project in the 1990’s, but the downturn in gold prices at that time cut that effort short. It is a pleasure to join Ethos and have a renewed shot at testing the compelling targets on this exciting project.”

Stated Craig Roberts, P.Eng., President & CEO of Ethos: “We are delighted to have come to an agreement with Victory to pursue a drill program targeting Carlin style gold mineralization at Iron Point based on a new interpretation to target Carlin style mineralization, and as well to have Dr. Hennigh on board to guide this exploration program.  We anticipate commencing drilling at Iron Point in the near future and will announce our plans for this drill program shortly.”

Stated Paul Matysek, Executive Chairman of Victory: “On behalf of the Board of Directors we are pleased to be working with Ethos to develop and test the gold potential at Iron Point. The geological setting with Lower Plate stratigraphy, historic drill intersections of gold mineralization and the presence at surface of both gold and associated mineralogy make this a very compelling drill target. This earn-in agreement provides Victory shareholders with tremendous optionality on both vanadium and gold.” 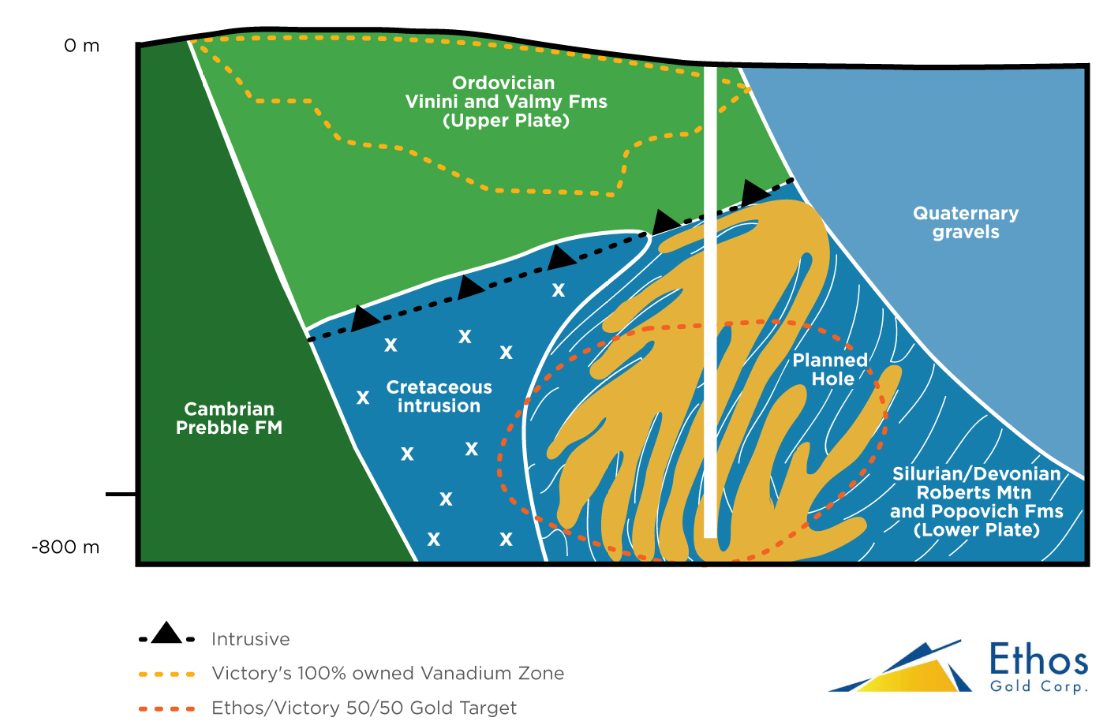 As illustrated in Figure 2, the Upper Plate Ordovician Vinini Formation overlies the interpreted Silurian/Devonian Roberts Mountain and Popovich Formations, separated by a thrust fault dipping at a shallow angle to the west. Subsequent north-south striking normal faulting has down-dropped the stratigraphy to the east along a range front. Drilling has confirmed a recumbent Zed fold parallel and to the west of the range front fault.  The exploration target is for Carlin style gold mineralization in this interpreted, folded Roberts Mountain and Popovich Formation stratigraphy.

A similar model including recumbent Zed folding along a range front fault is the focus of mineralization at Newmont’s Twin Creeks mine, located approximately 25 miles north of Iron Point. At Iron Point, anomalous gold has been encountered along the range front fault over a strike length of about 5 km.

Based on this interpretation Dr. Hennigh has located three holes which would be drilled vertically to target depths of between 500 and 800 meters (conceptually shown on Figure 2 above).  These holes are planned to penetrate through upper plate stratigraphy to the west of the north south striking normal range front fault and into lower plate stratigraphy.

Ethos is pleased to announce that Dr. Quinton Hennigh has agreed to join Ethos as a technical advisor. Dr. Hennigh is an economic geologist with more than 25 years of exploration experience with major gold mining firms including Homestake Mining, Newcrest Mining and Newmont Mining, with much of that work focused on exploration for Carlin style deposits in Nevada. Quinton is Chairman and President of Novo Resources Corp., founder and Director of Irving Resources Inc. and Executive Chairman of Miramont Resources Corp. Dr. Hennigh obtained a Ph.D. in Geology/Geochemistry from the Colorado School of Mines.

Ethos can earn a 50% interest in the gold and silver rights at Iron Point by spending a minimum of CDN$ 5 million over three years, with minimum expenditures of CDN $1.0 million in the first year. Following the earn-in a 50-50 joint venture will be formed between Ethos and Victory.  Victory will maintain 100% title to the Iron Point claims and on completion of its earn-in Ethos would have a contractual right to 50% of any gold or silver discovery. The vanadium mineralization is near surface with significant spatial separation from the conceptual deeper gold target. Victory maintains the right to ensure that any gold exploration and development plans do not interfere with development of its vanadium project.

Work targeting Carlin style gold at Iron Point will be supervised by Dr Quinton Hennigh, Technical Advisor to the Company. He is a Qualified Person as defined under National Instrument 43-101 and has read and approved this release.

This press release contains certain "forward-looking statements" within the meaning of Canadian securities legislation, including statements regarding the Company’s planned gold and silver exploration program at Iron Point. Although the Company believes that such statements are reasonable, it can give no assurance that such expectations will prove to be correct. Forward-looking statements are statements that are not historical facts; they are generally, but not always, identified by the words "expects," "plans," "anticipates," "believes," "intends," "estimates," "projects," "aims," "potential," "goal," "objective," "prospective," and similar expressions, or that events or conditions "will," "would," "may," "can," "could" or "should" occur, or are those statements, which, by their nature, refer to future events. The Company cautions that Forward-looking statements are based on the beliefs, estimates and opinions of the Company's management on the date the statements are made and they involve a number of risks and uncertainties. Consequently, there can be no assurances that such statements will prove to be accurate and actual results and future events could differ materially from those anticipated in such statements. Except to the extent required by applicable securities laws and the policies of the TSX Venture Exchange, the Company undertakes no obligation to update these forward-looking statements if management's beliefs, estimates or opinions, or other factors, should change. Factors that could cause future results to differ materially from those anticipated in these forward-looking statements include the risk of accidents and other risks associated with mineral exploration operations, the risk that the Company will encounter unanticipated geological factors, or the possibility that the Company may not be able to secure permitting and other agency or governmental clearances, necessary to carry out the Company's exploration plans, and the risk of political uncertainties and regulatory or legal changes in the jurisdictions where the Company carries on its business that might interfere with the Company's business and prospects. The reader is urged to refer to the Company's reports, publicly available through the Canadian Securities Administrators' System for Electronic Document Analysis and Retrieval (SEDAR) at www.sedar.com for a more complete discussion of such risk factors and their potential effects