Vancouver, BC – February 16, 2021, Ethos Gold Corp. (“Ethos” or the “Company”) (TSXV: ECC; OTCQB: ETHOF; Frankfurt: 1ET) is pleased to announce that it has entered into an agreement to purchase a 100% interest in 48 mineral claims covering 2,359 hectares (23.59 km2) contiguous with Ethos’ existing land position within the Schefferville Gold District, approximately 85 km northwest of Schefferville, Quebec.  The purchase agreement (the “Agreement”) is subject to acceptance by the TSX Venture Exchange (“TSXV”).

Stated Jo Price, P.Geo., M.Sc., VP Exploration of Ethos: “With this acquisition Ethos has consolidated a district scale project with significant historic work that has identified at least 53 separate gold occurrences over +20 km of strike. Minimal historic drilling yielded very encouraging intervals of gold mineralization.  We are delighted to have been able to consolidate such a large scale area of auriferous iron formation in Quebec with an extensive dataset to facilitate the next phase of exploration.  The Ethos technical team has considerable experience and discovery success in exploring iron formation hosted gold in Canada, and this will greatly facilitate our work.  We will initiate field work as soon as possible in the spring with the aim of completing an initial drill program later in 2021.” 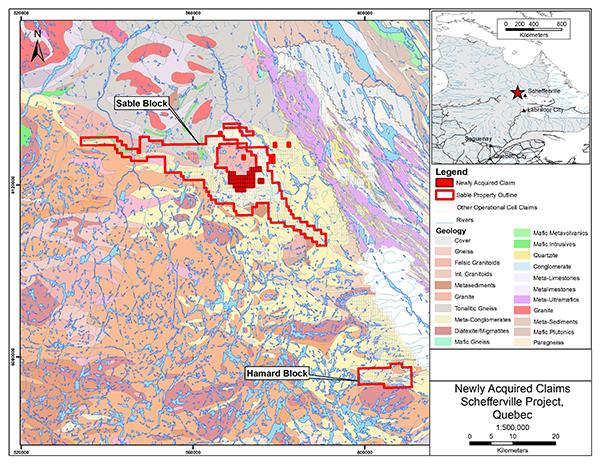 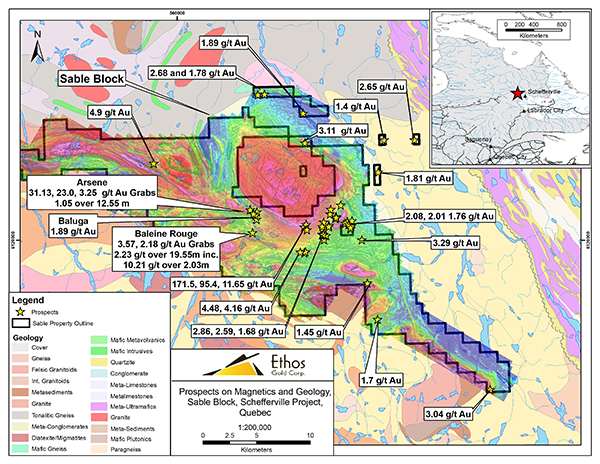 Figure 2.  Prospects on the Sable Block; Magnetics and Geology within the Schefferville Project

Figure 3.  Prospects on the Hamard Block; Magnetics and Geology within the Schefferville Project

1 Historical assay values have not been independently verified by the Company and a potential investor should not place undue reliance on historical results when making an investment decision, nor should they be used as the sole criterion for making investment decisions. There is no assurance that the Company can reproduce such results or that the historical results described therein will be realized. 2 “Best surface samples” are grab / select samples and not necessarily representative of mineralization hosted on the property.

The Schefferville Gold Project is centered on a structural corridor characterized by faulted and sheared iron formation stratigraphy extending for approximately 60 km on the Sable block, and 10 km on the Hamard block. The project was acquired through staking (see Company’s news release dated August 20, 2020) and three subsequent acquisition transactions (see news releases dated September 4, 2020; and October 15, 2020; and this release).

The Sable and Hamard claims cover extensive areas of the Lilois Complex, a 2.7 billion-year-old rock unit characterized by the presence of numerous iron formations, many of which locally host gold mineralization. Sable and Hamard occur within a 20 km wide (east-west) by 70 km long (north-south) corridor along the Quebec – Labrador border.  In 1985, a Quebec Ministry field team discovered the Lac du Canoe gold occurrence with sample results up to 18.9 g/t Au.  Between 1986 and 1997, follow up work by the Quebec Ministry and several companies resulted in the discovery of approximately 40 gold occurrences grading from 1 g/t Au to up to 40 g/t Au in mineralized iron formations with 3-20% pyrrhotite and up to 10% arsenopyrite. Subsequent drilling yielded intervals including 18.1 g/t Au over 0.7m, 5.83 g/t Au over 3.1m, and 1.05 g/t over 12.55m (Quebec Assessment Reports GM45903 & GM66613).

Ethos has now completed a compilation and validation of existing historical data and together with the new aeromagnetic data, numerous prospective targets for further ground truthing and prospecting have been identified. Numerous meta-iron formations, cross-cutting brittle and ductile shear structures have been identified on and/or near historic gold showings. This work has generated a significant number of new, untested target areas for follow up this year.

Much of the newly acquired claim block occupies a structurally favorable dilatant domain along the generally southeasterly trending Sable River Deformation Zone, where the stratigraphy is deflected to a more nearly east-west orientation along the southern margin of a large tonalite batholith. Many of the historic gold prospects, and much of the greenfields gold target areas, are located within this domain. Targets include potential gold mineralization at contacts with adjacent rocks or along related major structures and splays.

The extensive dataset acquired along with the new claim block includes gold assays and 50-element ICP-AES Aqua Regia analyses, for approximately 370 rock grab samples. Also included are a detailed aeromagnetic survey and geological mapping. Historical drill results from the Arsene and Baleine gold prospects, along with IP survey data from the Baleine Gold Prospect to the west of the new claim block, were also acquired as part of the data package.

Using the new database and the airborne magnetic data, numerous meta-iron formations, cross-cutting brittle and ductile shear structures have been identified on and/or near historic gold showings leading to a number of new, largely untested target areas. A Lidar survey is planned for spring to aid in further target definition. The initial field program will consist of ground truthing of priority targets as well as comprehensive prospecting along the length of the Sable River Shear Zone with the intention of generating trench and drill targets for the second half of 2021.

The technical content disclosed in this press release was reviewed and approved by Jo Price, P.Geo., M.Sc., VP Exploration of Ethos, and a Qualified Person as defined under National Instrument NI 43-101 (“NI 43-101”).

Ethos Gold, a Discovery Group company, has accumulated a portfolio of district scale projects in British Columbia, Ontario, Quebec, Newfoundland, and Nevada that we believe have large scale discovery potential.  The Company has a strong technical team led by Dr. Rob Carpenter, formerly the CEO of Kaminak Gold Corporation.  Rob led the Kaminak team from initial listing in 2005 through acquisition and discovery of the multiple-million ounce Coffee Gold Project. In Ethos he has assembled a senior geologic team with a strong record of discovery success including Dr. Robert Brozdowski, P.Geo., Dan MacNeil, M.Sc., P. Geo, and Dr. Alan Wainwright, P.Geo.  Dr. Quinton Hennigh, an economic geologist with 25 years of exploration experience formerly with Homestake Mining Company, Newcrest Mining and Newmont Mining Corp oversees the Company’s work at the Iron Point project in Nevada.  With working capital of approximately C$4.5 million, the Company is well funded to advance its projects.

For further information about Ethos Gold Corp. or this news release, please visit our website at ethosgold.com or contact Alex Heath at 604-354-2491 or by email at alexh@ethosgold.com.

This press release contains certain "forward-looking statements" within the meaning of Canadian securities legislation, including, but not limited to, statements regarding the Company’s plans with respect to the Company’s projects and the timing related thereto (including the Company’s planned activities for 2021 on the Schefferville Project and its development of drill targets on the Schefferville Project), TSXV approval of the Agreement and the Company’s exploration commitment under the Agreement. Although the Company believes that such statements are reasonable, it can give no assurance that such expectations will prove to be correct. Forward-looking statements are statements that are not historical facts; they are generally, but not always, identified by the words "expects," "plans," "anticipates," "believes," "intends," "estimates," "projects," "aims," "potential," "goal," "objective," "prospective," and similar expressions, or that events or conditions "will," "would," "may," "can," "could" or "should" occur, or are those statements, which, by their nature, refer to future events. The Company cautions that forward-looking statements are based on the beliefs, estimates and opinions of the Company's management on the date the statements are made, including that the Company will carry out its planned activities on the Schefferville Project in the manner and on the timelines currently anticipated and that the TSXV will approve the Agreement, and they involve a number of risks and uncertainties. Consequently, there can be no assurances that such statements will prove to be accurate and actual results and future events could differ materially from those anticipated in such statements. Except to the extent required by applicable securities laws and the policies of the TSXV, the Company undertakes no obligation to update these forward-looking statements if management's beliefs, estimates or opinions, or other factors, should change. Factors that could cause future results to differ materially from those anticipated in these forward-looking statements include the risk of accidents and other risks associated with mineral exploration operations, the risk that the Company will encounter unanticipated geological factors, or the possibility that the Company may not be able to secure permitting and other agency or governmental clearances, necessary to carry out the Company's exploration plans, risks and uncertainties related to the COVID-19 pandemic, and the risk of political uncertainties and regulatory or legal changes in the jurisdictions where the Company carries on its business that might interfere with the Company's business and prospects and the risk that the TSXV may not approve the Agreement in a timely manner, or at all. The reader is urged to refer to the Company's reports, publicly available through the Canadian Securities Administrators' System for Electronic Document Analysis and Retrieval (SEDAR) at www.sedar.com for a more complete discussion of such risk factors and their potential effects.