August 1, 2019 – Vancouver, British Columbia – Dunnedin Ventures Inc. (the "Company" or “Dunnedin”) (TSX-V: DVI) announces the commencement of the 2019 exploration program at its 100% owned MPD Copper-Gold Porphyry Project in Southern Central British Columbia. In preparation for upcoming drilling, the Company has mobilized field crews to the property for mapping, sampling and prospecting work.

Claudia Tornquist, President and CEO of Dunnedin said, “These are pivotal times at Dunnedin as we embark on programs to advance our copper gold assets, starting with this inaugural program at MPD, followed by work at Trapper and Mohave later in 2019. MPD has many attributes that could drive significant returns for our shareholders, not least its location just off the highways 5A and 97C and proximity to infrastructure in an established mining area in Southern British Columbia. We are also excited about the project’s large footprint and its promising historic exploration results, which clearly show the potential for a major copper-gold porphyry system.”

The recently consolidated 78.5 square kilometre MPD Project land package (historically called Man, Prime and Dillard, Figure 1) is ideally positioned in the Quesnel Trough, a producing copper-gold porphyry belt, that hosts several world-class mines. The project’s Nicola Belt geology has many similar characteristics to nearby alkalic porphyry systems at the Copper Mountain Mine to the south, and New Gold’s New Afton Mine to the north.

In preparation for drilling at MPD, work has commenced to survey previous drill holes and trench sites, tie-in historic exploration data, prospect new areas of interest and confirm access for proposed drill sites. As part of this work, historic surface trenches from 1980 and earlier are being resampled by hand-trenching to substantiate mineralization and determine geological-geochemical controls within key target areas. In addition, soil geochemical surveys are being carried out to augment and in-fill geochemical anomalies identified in historic surveys. Results for this preliminary work will be reported in August as received. 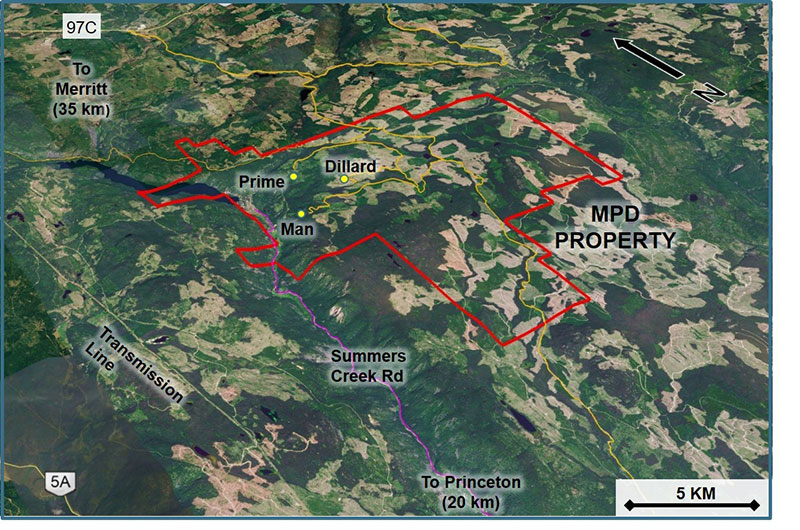 Dunnedin has applied for a multi-year area-based Exploration Permit with the British Columbia Ministry of Energy, Mines and Petroleum Resources requesting authorizations allowing up to 18 drill pads and up to 10 mechanical trenching sites in 2019 and 2020.  Prior to submission of the application, the Company consulted with, and engaged the Upper Similkameen Indian Band to conduct an in-field assessment of proposed work sites. A report provided to the Company in late May determined there was low to nil archeological potential or risk for the work proposed. Dunnedin’s application is currently being advanced through the review process by regulators. The Company expects to commence drilling immediately upon receipt of the permit.

Jeff Ward, P.Geo, Vice President Exploration and a Qualified Person under National Instrument 43-101, has reviewed and approved the technical information contained in this release.

For further information please contact Mr. Knox Henderson, Investor Relations, at 604-551-2360 or
khenderson@dunnedinventures.com
On behalf of the Board of Directors
Dunnedin Ventures Inc.